I recently wrote a blog about Lord Young’s Enterprise for All report (down there…) and found myself agreeing with his assertion that “people are more then the sum of their qualifications” and supporting the idea that not all people are academically equal He goes on to say that for years the UK education system was disproportionately helping those that were academically minded – to the detriment of those that come from challenging backgrounds.

He argues in the report (and in person as it happens) that those who come from challenging backgrounds (long-term unemployed families, working class, low aspiration and / or with learning difficulties) are often labeled and self-selected as ‘underachievers’ or worse, ‘useless’ by the time they are 11, 12 , 13 – the very time they should be full of confidence and promise.

Enterprise skills and mindset, we agree, are essential in making people from all backgrounds and experience feel more confident and ‘able’ in their approach.  So what’s this o to do with anything, you ask…

Then I tweeted a few times, including @TheLordYoung in the tweets – stating that it was unusual for me to find myself agreeing with a Conservative (ex-minister and now Lord). Well, The Lord replied to one of my tweets, I re-replied and found myself on the end of a DM asking us to ‘come in for a chat’ at Number 10.

After getting myself off the floor, we called his assistant at number 10 Downing Street and booked a meeting. That meeting was 45 minutes on the 23rd March that confirmed that what we are doing with our new project MEEE (with Sid Madge and Penny Matthews of Mad Hen) is of the utmost importance and WILL change people’s lives for the better.

MEEE is an acronym for My Entrepreneurial Enterprise Education that puts the individual at the centre of their learning, explores peoples’ notions of themselves and develops these through workshops and records their skills, achievements, passions (once discovered) and what makes them, them…if you see what I mean.

Anyway – it was an amazing experience, here’s a show-off picture and Lord Young is endorsing our project! If you’re interested in finding out more about MEEE, well, you, well MEEE the concept, just drop me an email or a tweet at @EnterpriseSBox. 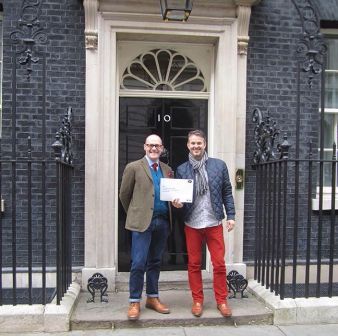