Last week – 15th September 2015 – we were delighted to support the Arthur Rank Hospice Charity in Cambridge who are raising funds to build a new Hospice building in the City. Our team of six ran Stock Market Challenge for 200 professionals in the historic Cambridge Union Society debating chamber and really managed to get the crowd excited and enthusiastic in their trading teams! Working to invest their starting fund of £ 15,000 the traders started gently and in no time were transacting trades of over £ 50,000 in a single deal!

We worked closely with the fundraising team at the hospice and sponsors at Rathbones Wealth Mangement and helped to deliver a brilliant evening with loads of funds raised towards the great cause.

Dr Lynn Morgen, the Chief Executive of the Arthur Rank Hospice said: “It was a fantastic event on Tuesday night, many thanks to you and your team, we would be very interested in running the event again”. 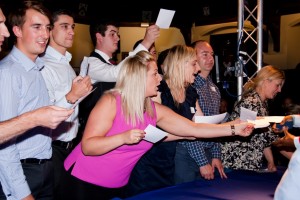 Here is the Press Release written by Dawn at the Charity:

“Eighteen of Cambridge’s key companies traded virtual stocks and shares on Tuesday night (15th September) at Cambridge Union’s Debating Chamber in a high-octane competition to become the most profitable trader whilst raising funds for Arthur Rank Hospice Charity. Santander victoriously claimed The Rathbones’ trophy, with an astounding grand total of £402,100, more than £210,000 ahead of their closest rival, as the bell rang for the close of the evening’s trading.

The evening, sponsored by Rathbones Cambridge, was organised after the Charity became keen to run a fundraising event which would appeal to the vibrant business community in the city. Each team of ten started with a notional figure of £15,000 and employed their best trading tactics in order to maximise their portfolio value through buying and selling shares in companies and trading in the dollar. The evening unfolded against a virtual week of unpredictable and fast-moving world events, with participants bombarded with updates from daily financial newspapers, and news flashes from TV bulletins and radio reports.

HSBC took second place with a total of £191,700 and Barclays came in at third with £164,200, with teams from Thomson Webb and Corfield, Bailey Fisher, Ashton KCJ, Birketts, Deloitte, Grant Thornton, Handelsbanken, Mattioli Woods, Strutt & Parker, Cheffins, Hewitsons, Mills & Reeve, Natwest, Penningtons Manches and Rathbones also taking part. Louise Hudson, Investment Director at Rathbone Investment Management Ltd commented: “The evening was suffused with a genuine stock market buzz and all those taking part entered into the spirit with great enthusiasm in support of such a very worthy local cause”.

Raffle tickets sold throughout the evening raised £1,305 and a stunning auction hosted by Bill King of Cheffins generated a further £6,620.  Highlights included a made to measure bespoke man’s suit from Giulio’s Fashion, a black tie three course dinner for two followed by a performance of Mozart’s Marriage of Figaro at Glyndebourne, and two tickets to Kenneth Branagh’s Romeo & Juliet including drinks with Sir Derek Jacobi.

The Hospice would like to thank: Rathbones for sponsoring the event; Cambridge Union for providing the venue and waiting staff on the evening; all the individuals and companies who took part; and those who donated raffle and auction prizes including Sir Derek Jacobi, Giulio’s Fashion, Andy Swarbrick who donated the Glyndebourne auction lot, Rizzle Kicks, Kings College, Essex County Cricket and the Ship Inn, Brancaster.  The funds raised from the evening are yet to be announced, but will be specifically directed towards the £10.5 million required for the Charity’s new purpose built hospice at Shelford Bottom.